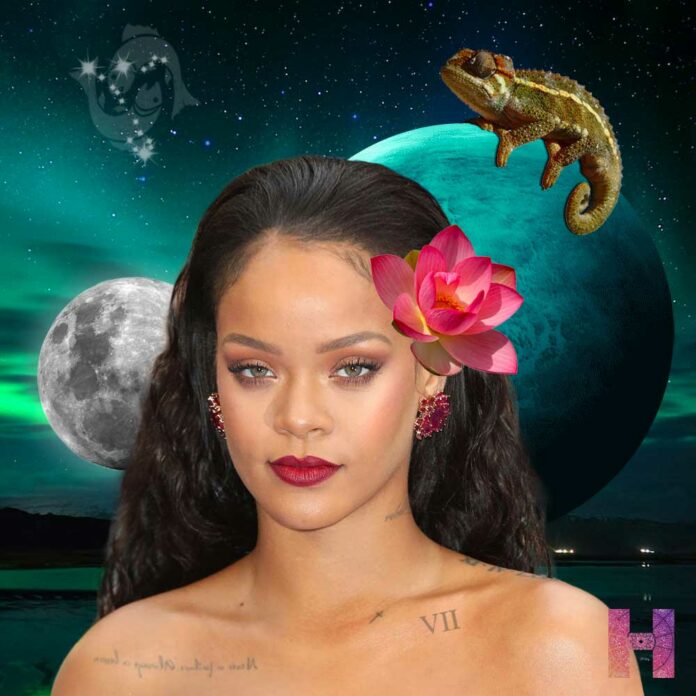 Here’s everything you need to know about the gracious Pisces sign.

You’ll find out the correct Pisces sign dates, the truth about the constellation of Pisces, and the symbolism behind the Pisces sign.

You’ll also learn about the traits of Pisces people, their characteristics, personality, and Pisces compatibility with other zodiac signs.

Before we explore the emotional Pisces in detail, let’s do a quick review of the sign’s main attributes:

In charge of the astrological skies from February 19 to March 20, Pisces is the twelfth and final sign of the zodiac.

During this time – mid-February to mid-March – the world enters a quiet hibernation stage, dreaming of holidays and warmer days. 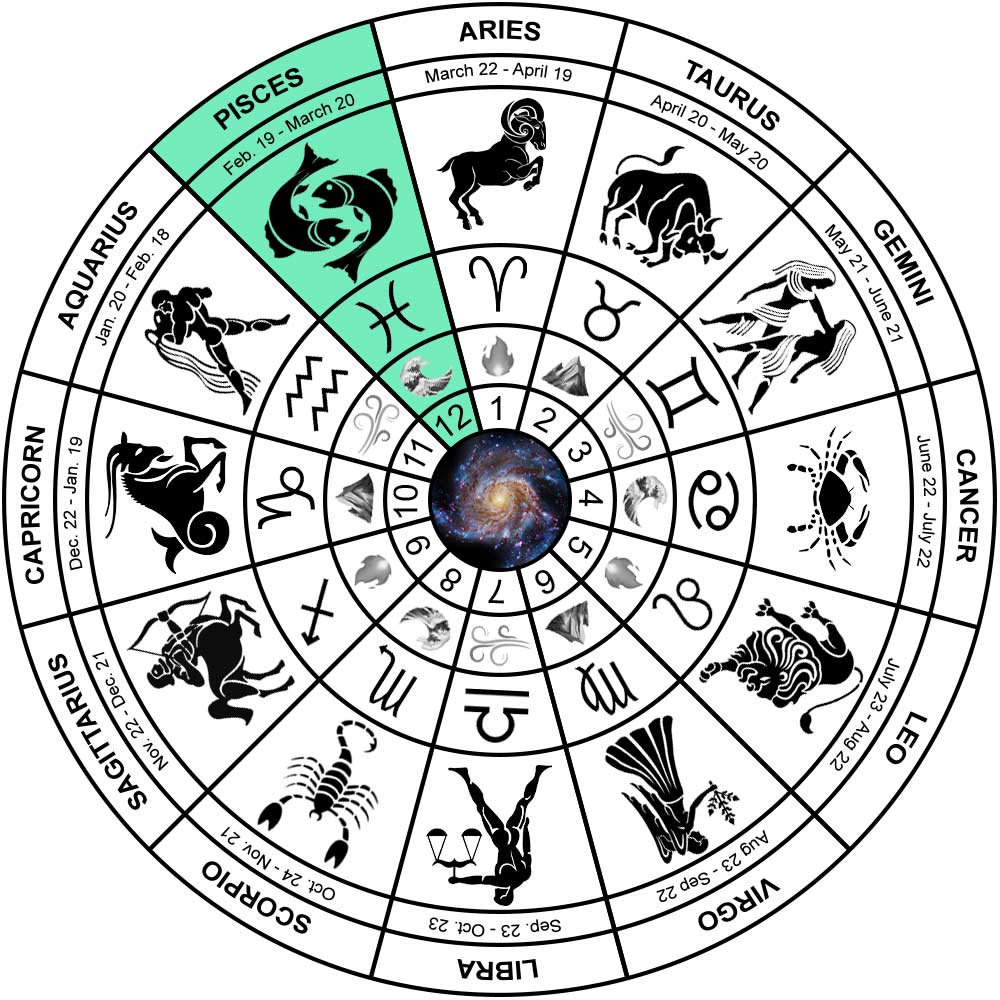 Pisces’ zodiac sign is symbolized by two fish swimming in opposite directions, representing the sign’s split attention between fantasy and reality.

Pisces symbol is the FISH 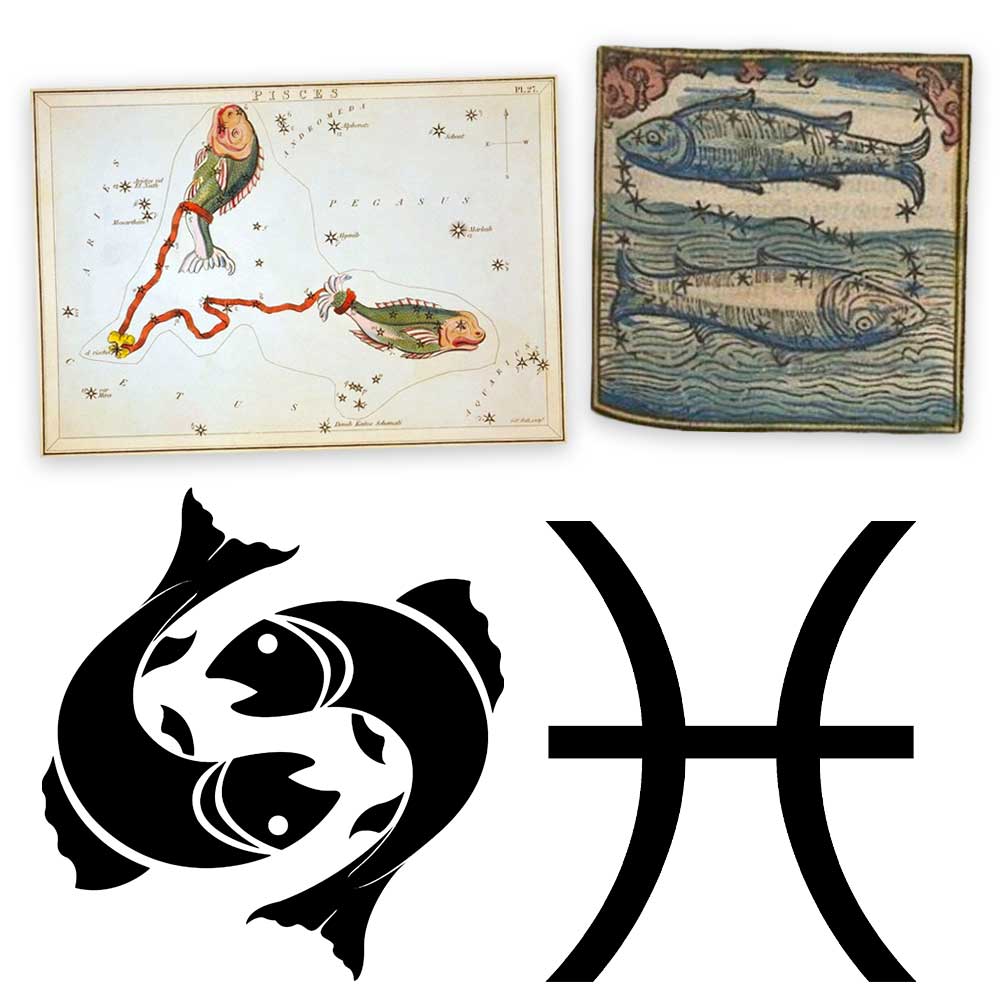 The fish symbol is derived from the Greek myth of Aphrodite and Eros.

The pair jumped into a river to escape the monster Typhon and changed into Fish to swim and reach safety. 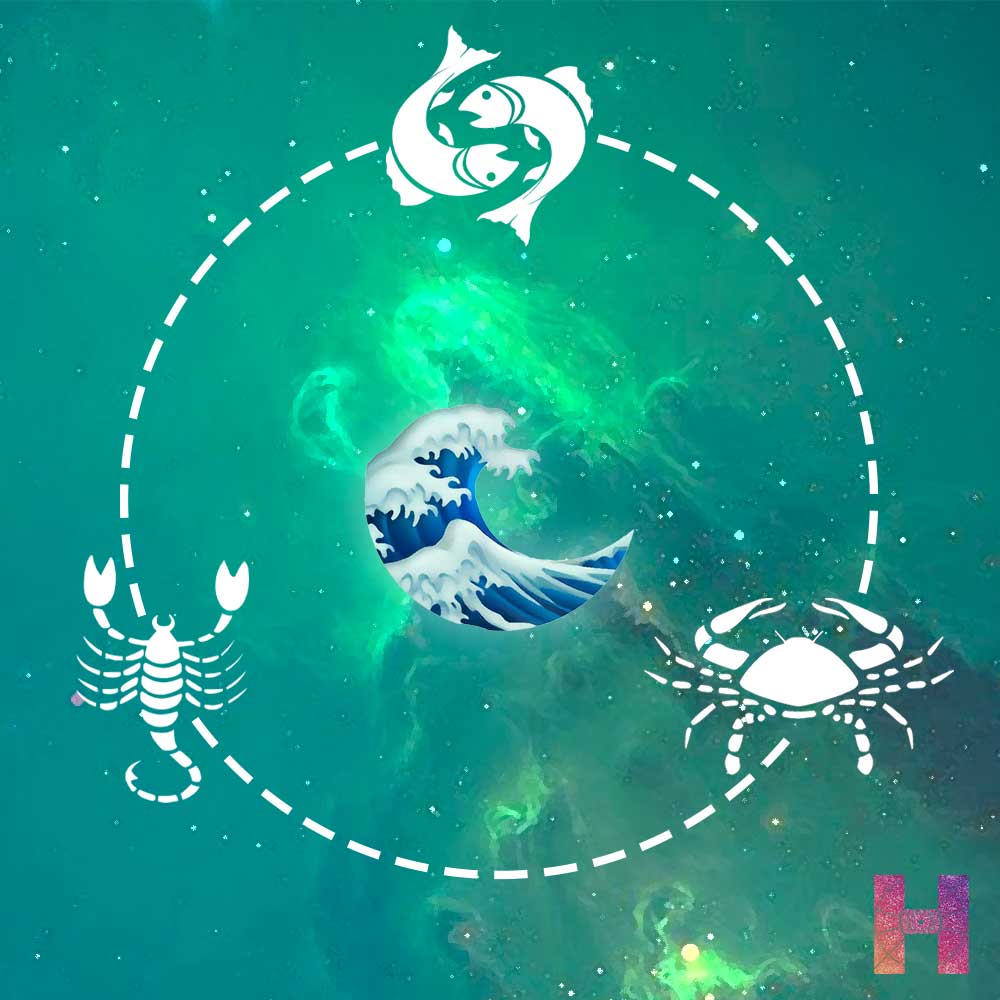 In astrology, the zodiac signs are created from (associated with) one of the four main elements: Water, Earth, Air, and Fire.

The constituting element (Water, Earth, Air, and Fire) impact the sign’s character and provides insight into the best life and love matches.

Pisces is the last Water element of the zodiac and hence, the one that blends characteristics from the other Water signs (Cancer and Scorpio). 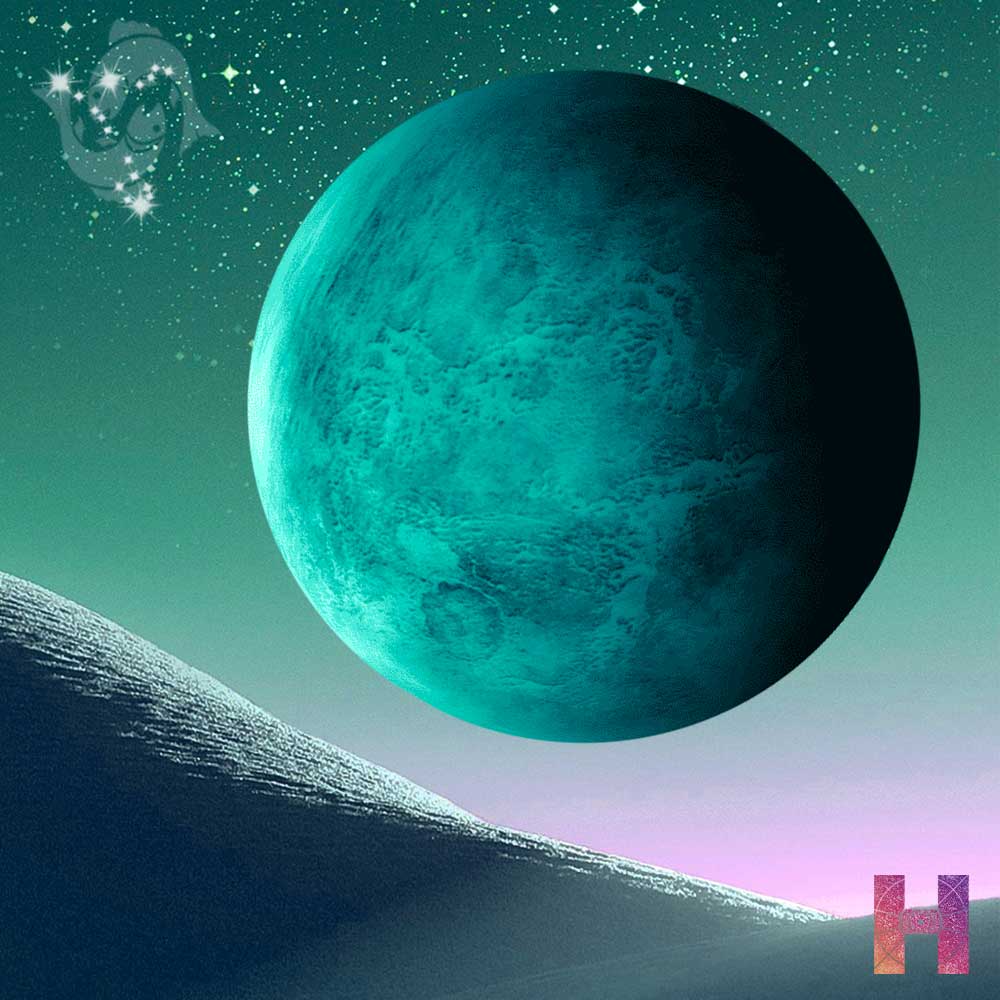 Pisces is ruled by Neptune, the planet that governs creativity and dreams.

As the planet that oversees dreams, fantasies, and psychic abilities, Neptune bestows the world with wintery moods and dreamy feelings so, characteristics of the Pisces sign. 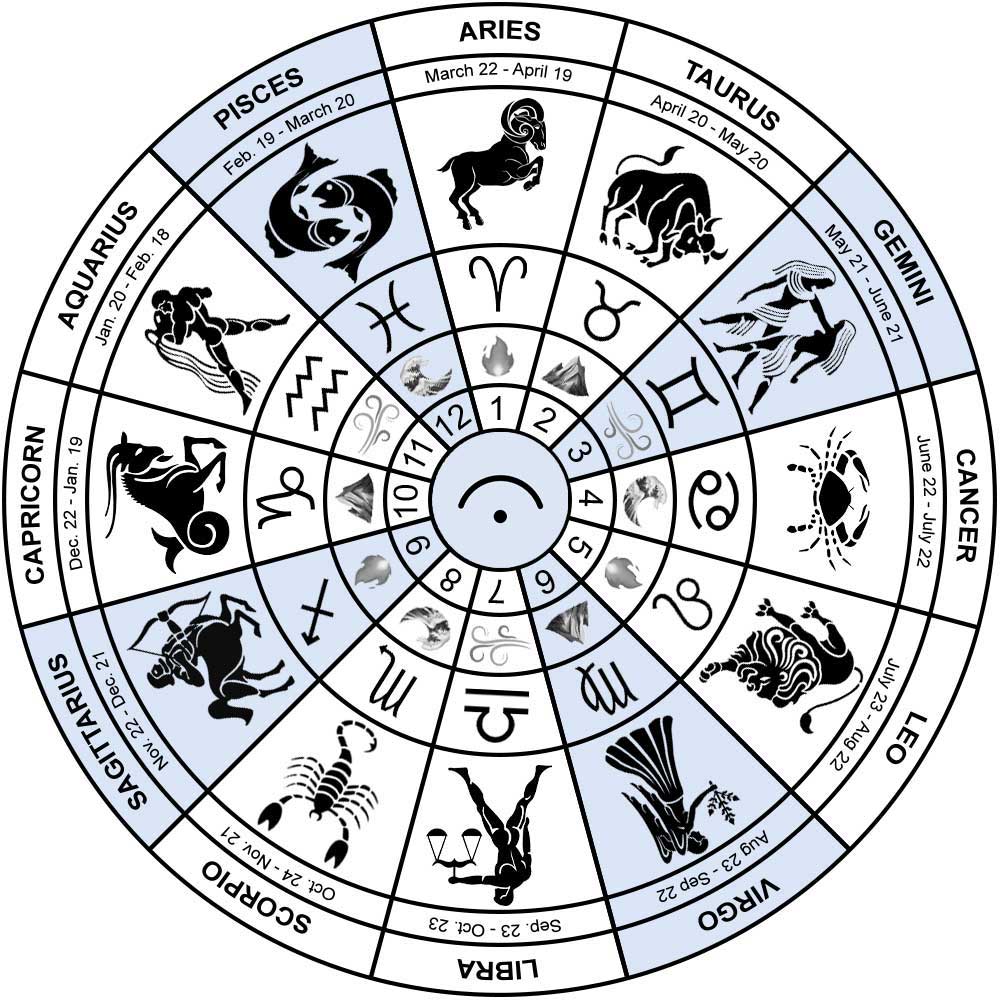 In astrology, the 12 zodiac signs are further categorized by their Modality (the sign’s energy and vibe).

There are three primary Modalities: Mutable, Fixed, and Cardinal, each hosting 4 zodiac signs.

The astrological sign of Pisces has a Mutable nature.

As such, Pisces people are flexible, open-minded, easy-going, and willing to hear all sides of an issue before making a decision.

Pisces – Latin plural for Fish – is named the first zodiac constellation because the sun appears in front of this constellation at the time of the March equinox.

Greek and Roman versions of Pisces’ sky lore originate from Syria, where fish were considered divine.

According to Greek mythology, the fire-breathing monster Typhon was about to devour Aphrodite (the Roman Venus) and her son Eros (the Roman Cupid).

To escape, they turned into fish and jumped into the Euphrates river, a story later immortalized in the sky. 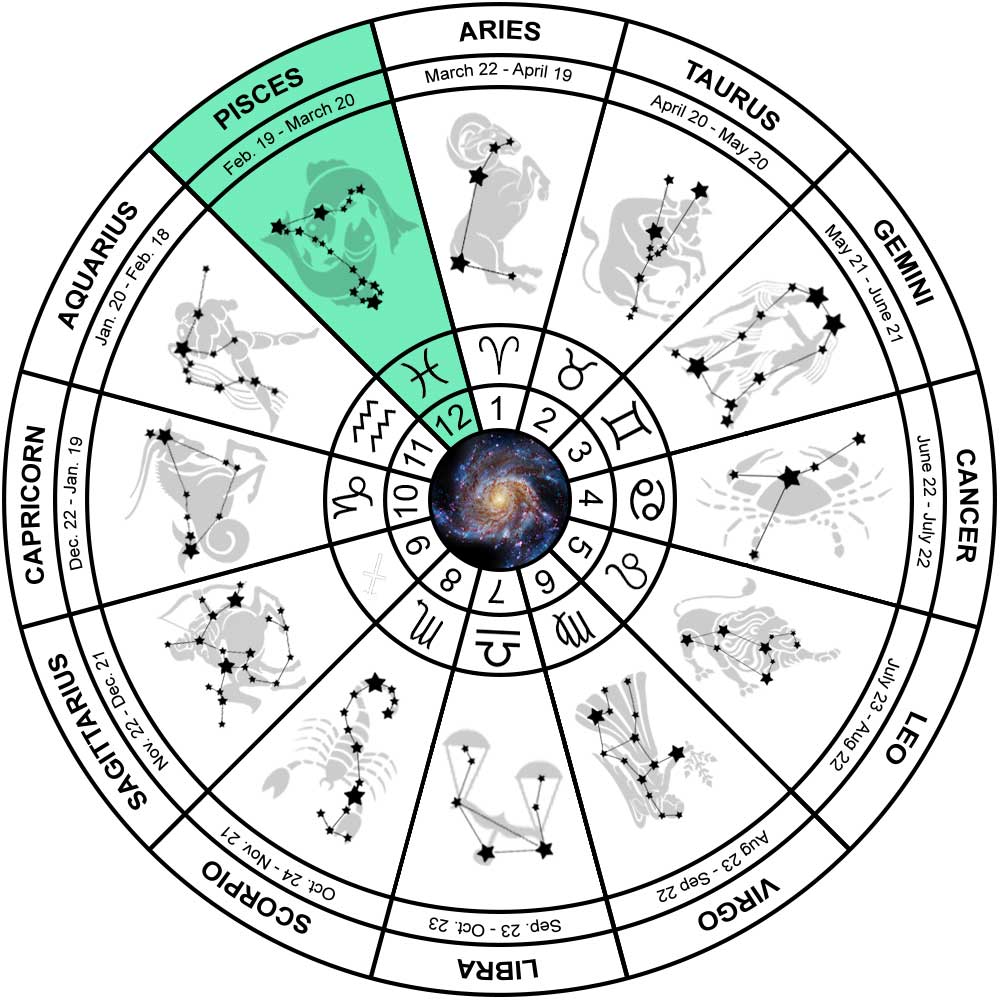 Pisces folks are some of the most magical people you’ll ever encounter. 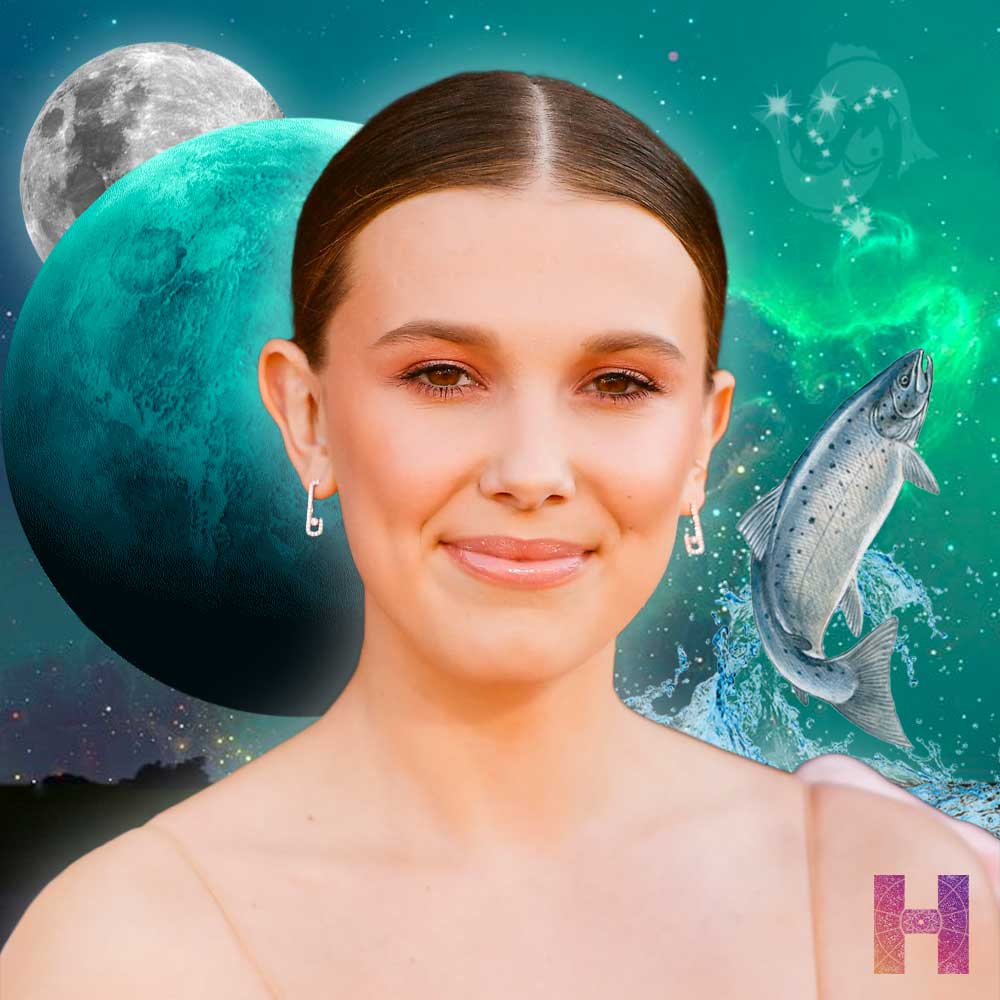 Most Pisces people carry a deep emotional load but also excel at channeling it into therapeutic and creative outlets like movies, music, and arts.

Pisces is ARTISTIC and MYSTIC

When the Pisces sign manages to channel emotions into self-expression, it becomes highly creative hence the moniker of “the artist of the zodiac.”

With the creative arts industry under the realm of Neptune, Pisces’ ruling planet, no wonder this sign excels at creative self-expression: writing, acting, dance, and music making.

Moreover, as Pisces have profound feelings and often struggles with blue moods, the sign is drawn to philosophy, psychology, metaphysics, and even magic.

However, Pisces’ Neptunian influence can also lead to a general spaciness, making them struggle to discern fact from fiction.

Pisces is EMPATHIC and COMPASSIONATE

Friendly and selfless Pisces folks are always willing to help others.

With a deep understanding of life, Pisces form great relationships with other zodiac signs based on natural order and shared feelings.

Ending the cycle of the previous two Water signs, Cancer and Scorpio, Pisces are able to forgive the past and see the best in people.

However, Pisces must learn to protect their empathy and forgiving capacity by avoiding external emotions from overwhelming them.

Moreover, when flooded with tolerance and compassion, Pisces will exaggerate serving others and ignore their wellbeing.

The Mutable Water sign’s empathic nature is a double-edged sword.

Prone to having a passive approach to life, the astrological Fish often find themselves wading in the depths of hopelessness, despair, self-pity, and pessimism.

Struggling to set boundaries, Pisces natives often feel like they are being taken advantage of, becoming inclined to paint themselves a martyrs.

As the final sign of the zodiac, Pisces has learned the lessons encountered by all previous signs to the point that it makes them look almost psychic.

Seen as the most compassionate sign of the astrological wheel, Pisces have a highly empathetic nature.

However, Pisces’ innate sensitivity often overwhelms them with feelings and takes them to a place of emotional dreaming and fantasy.

As such, Pisces folks must remind themselves to stay grounded in the material realm (there’s another reason why the Pisces sign rules the feet).

With psychic-like abilities, Pisces has the power to sense one’s true identity, subconscious, and spiritual side. 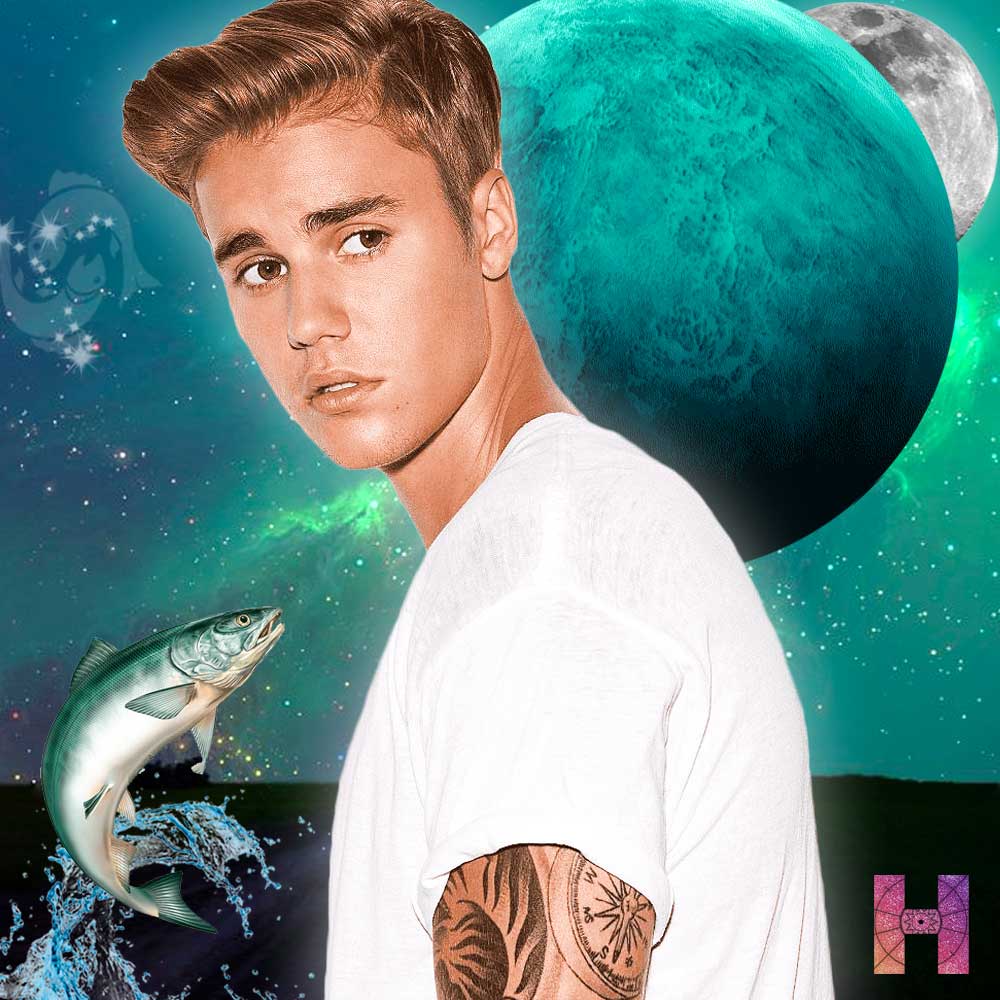 However, when not controlled, Pisces’ imagination becomes an illusion and a form of escapism, gaining them the reputation of being flaky or delusional.

Therefore, Pisces sign people must be wary of mirages and avoid seeing the world through “pink-colored glasses.”

Moreover, this water sign must remember that problems can’t be solved by running (swimming) away.

Yet, given their kind and gentle nature, relationships with the mystical Pisces folks are easy and guaranteed to involve unique spiritual explorations.

Pisces is Most Compatible with PISCES, CANCER, and SCORPIO 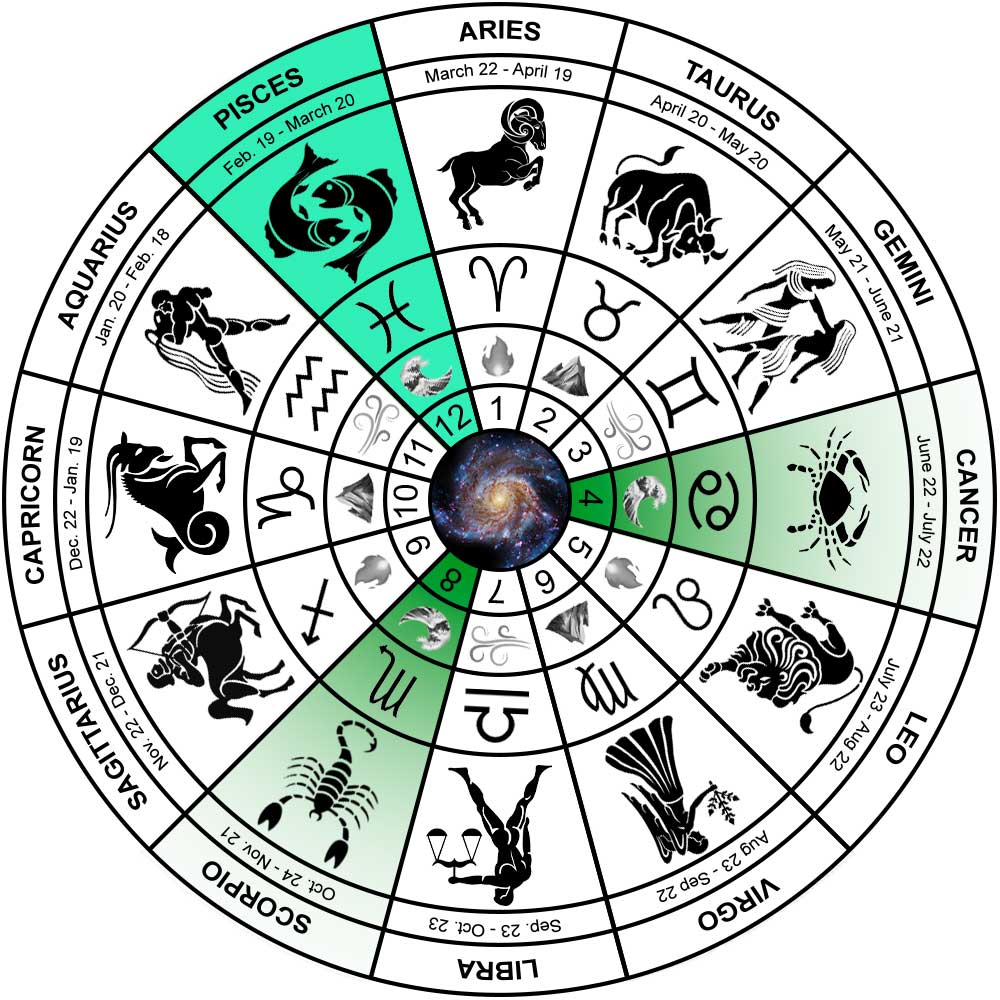 The Water signs (Cancer and Scorpio) are great matches to Pisces, given their similar clairvoyant and emotional nature.

Pisces is Also Compatible with TAURUS, VIRGO, and CAPRICORN 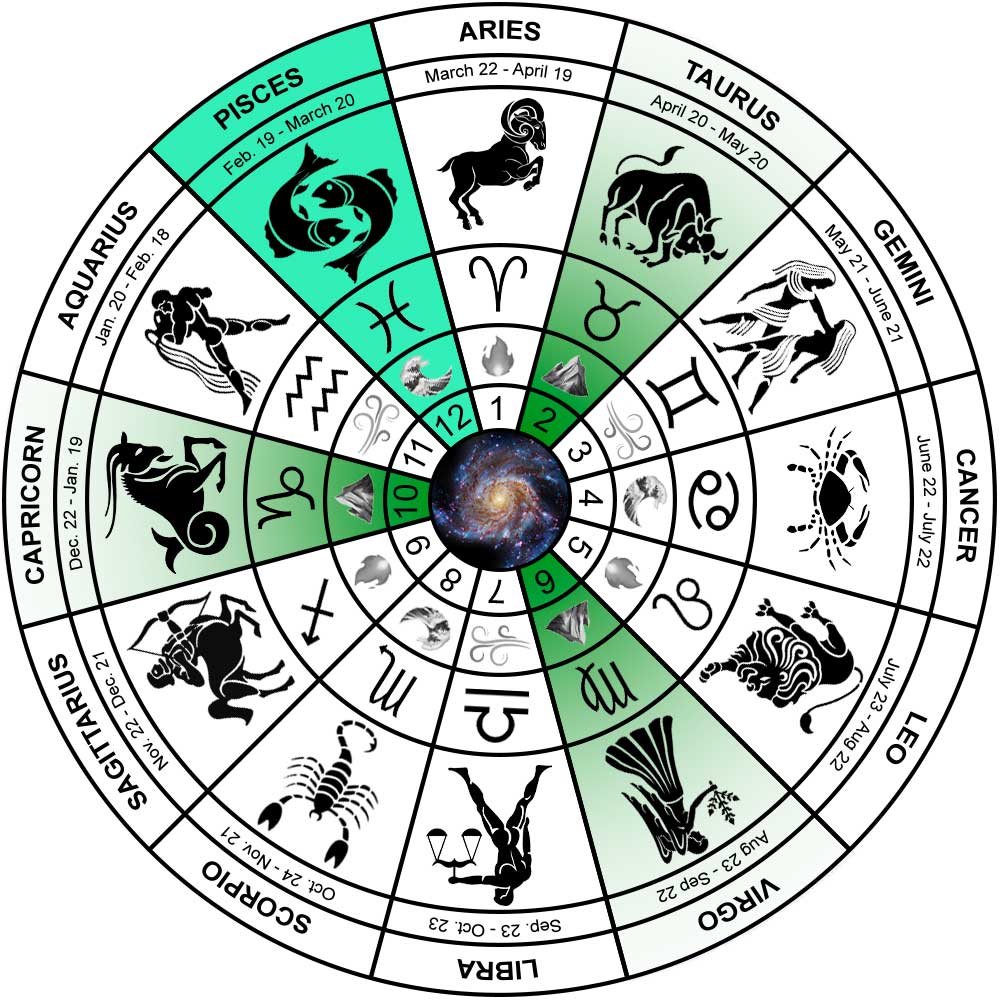 Water element signs are also compatible with Earth, as the two elements share attributes and complement one another.

Both Water and Earth signs are loyal, service-oriented, and invested in nurturing their home life.

That’s why Pisces is compatible with the mellow Taurus, carrying Virgo and stable Capricorn.

Pisces is Less Compatible with GEMINI, LIBRA, and AQUARIUS 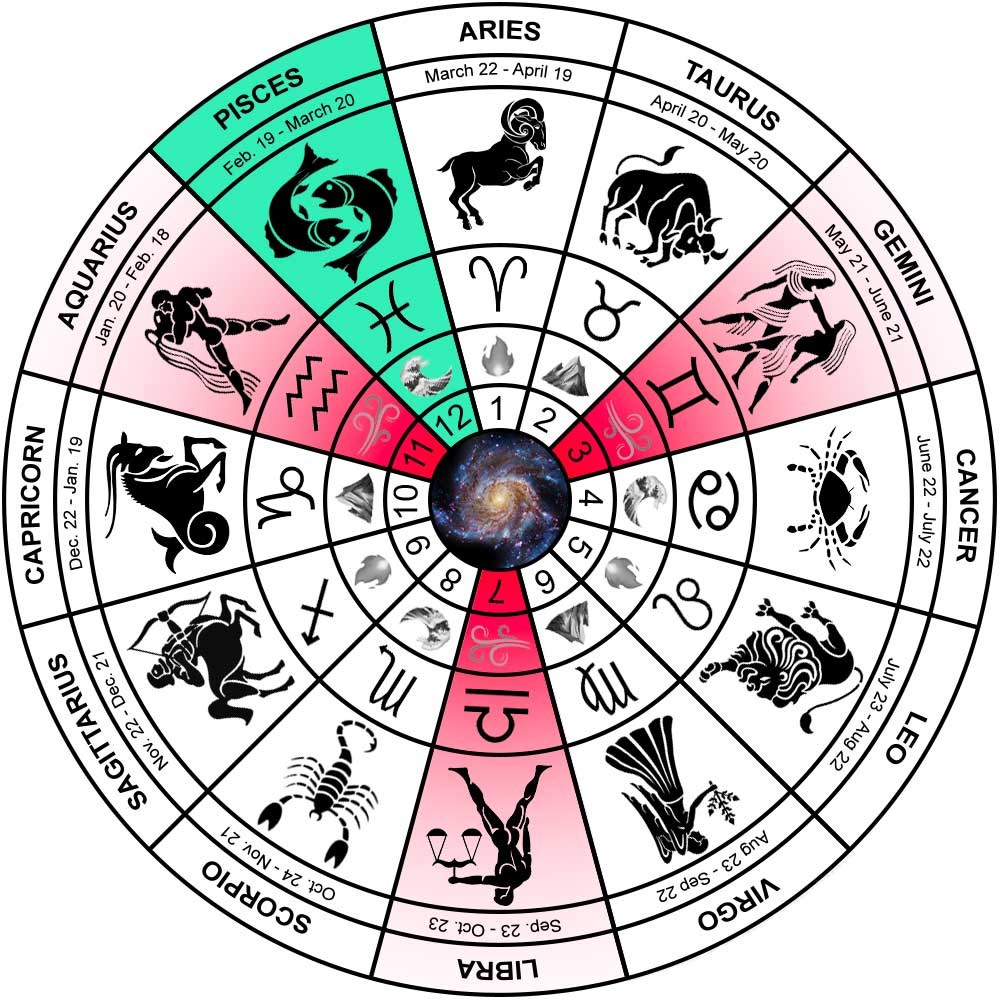 Air signs (Gemini, Libra, and Aquarius) are the zodiac thinkers and the human rights fighters of the horoscope.

For that, the Air signs are empathic towards Pisces’ emotional nature and innate artistic craft.

However, in time, Pisces folks might feel let down by the Air signs’ interest in “the greater good” rather than the personal and direct love Pisces folks desire so much.

Pisces is Least Compatible with ARIES, LEO, and SAGITTARIUS 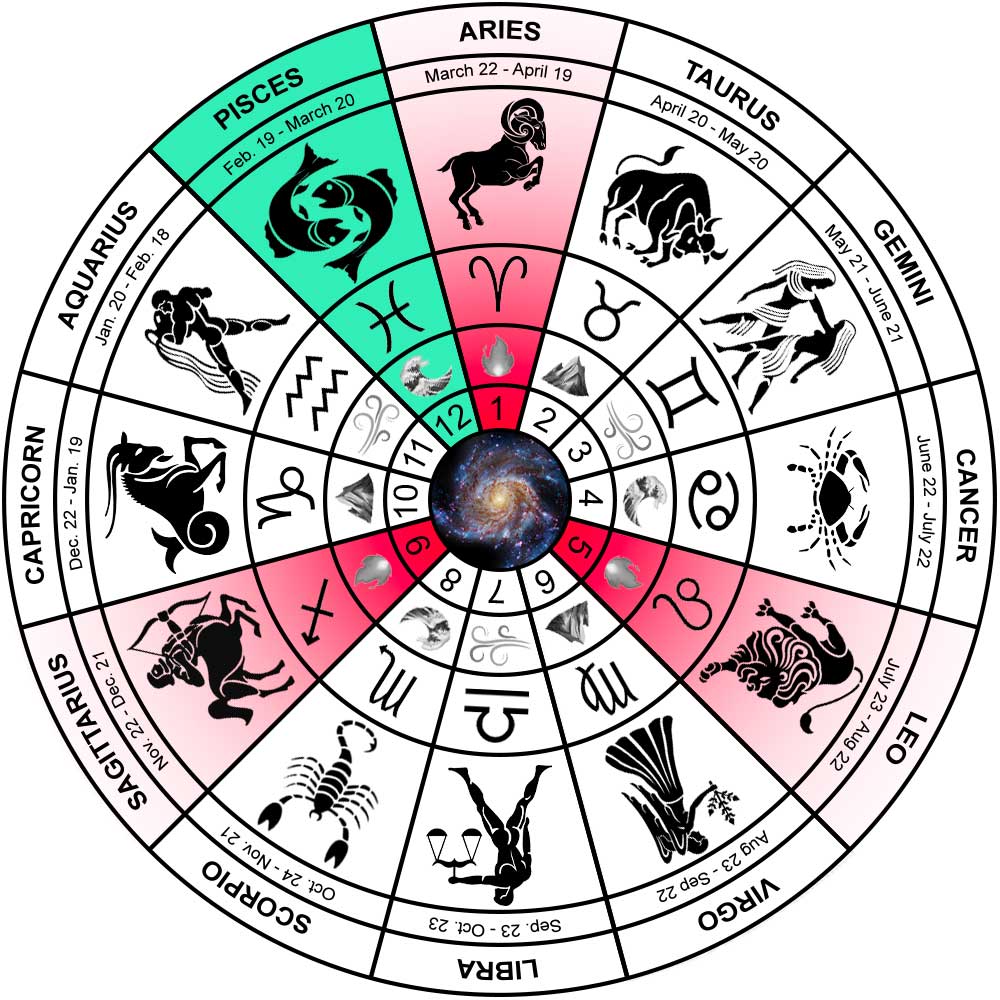 Fire signs (Aries, Leo, Sagittarius) are on the opposite spectrum of Water element signs.

In nature, Water puts off Fire; similarly, in the astrological charts, Water signs will wash away the Fire sign’s burning passion for life.

The dreamy Pisces sign perceives the Fire signs as too rushy, inconsiderate, and self-centered for a serious relationship.

Pisces have Compatibility Challenges with VIRGO 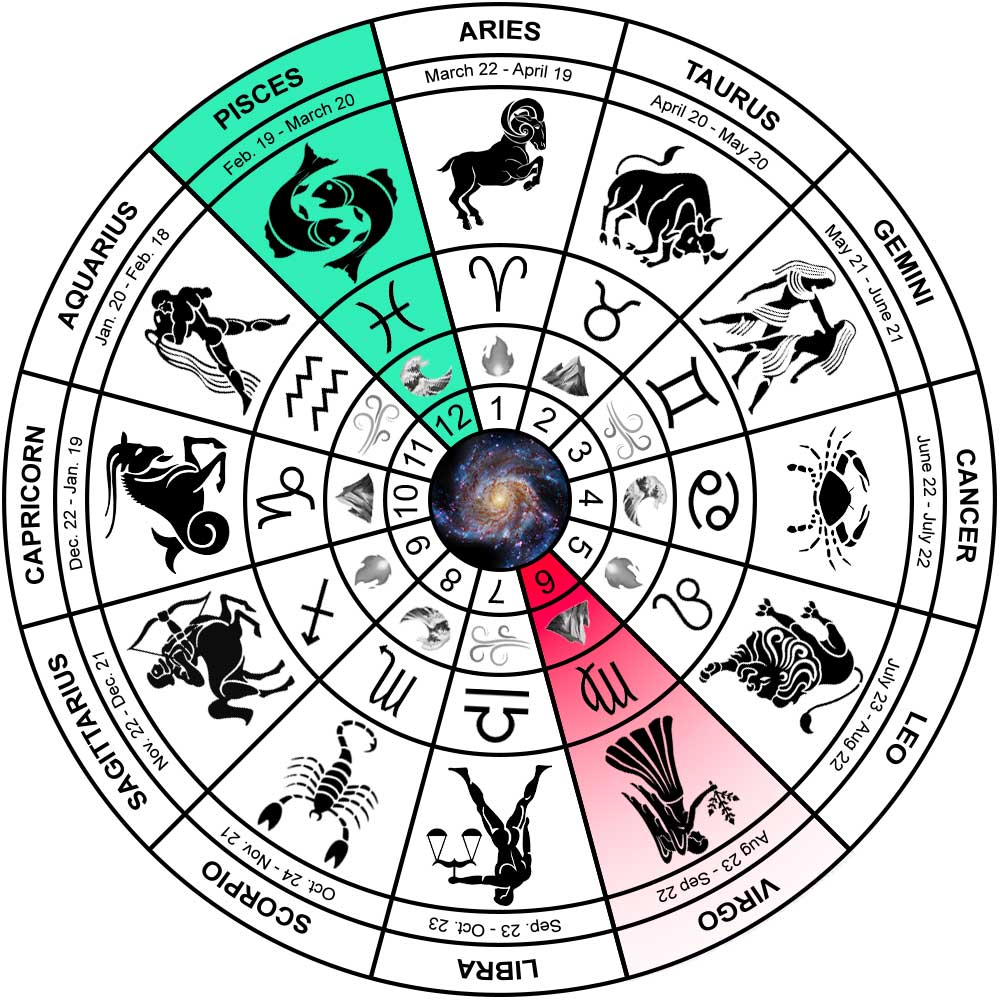 Virgo is placed at the opposite zodiacal pole to Pisces for a good reason.

Watery Pisces is ruled by the spiritual, dreamy, and escapist power of the Neptune planet.

In contrast, Virgo is informed by the planet Mercury and, thus, is guided by facts, analysis, and concrete data.

Fighting against their core nature, both signs might struggle to sync and create long-term, functional relationships.

Pisces men are attracted to carrying and practical partners that can keep them connected to the material world. 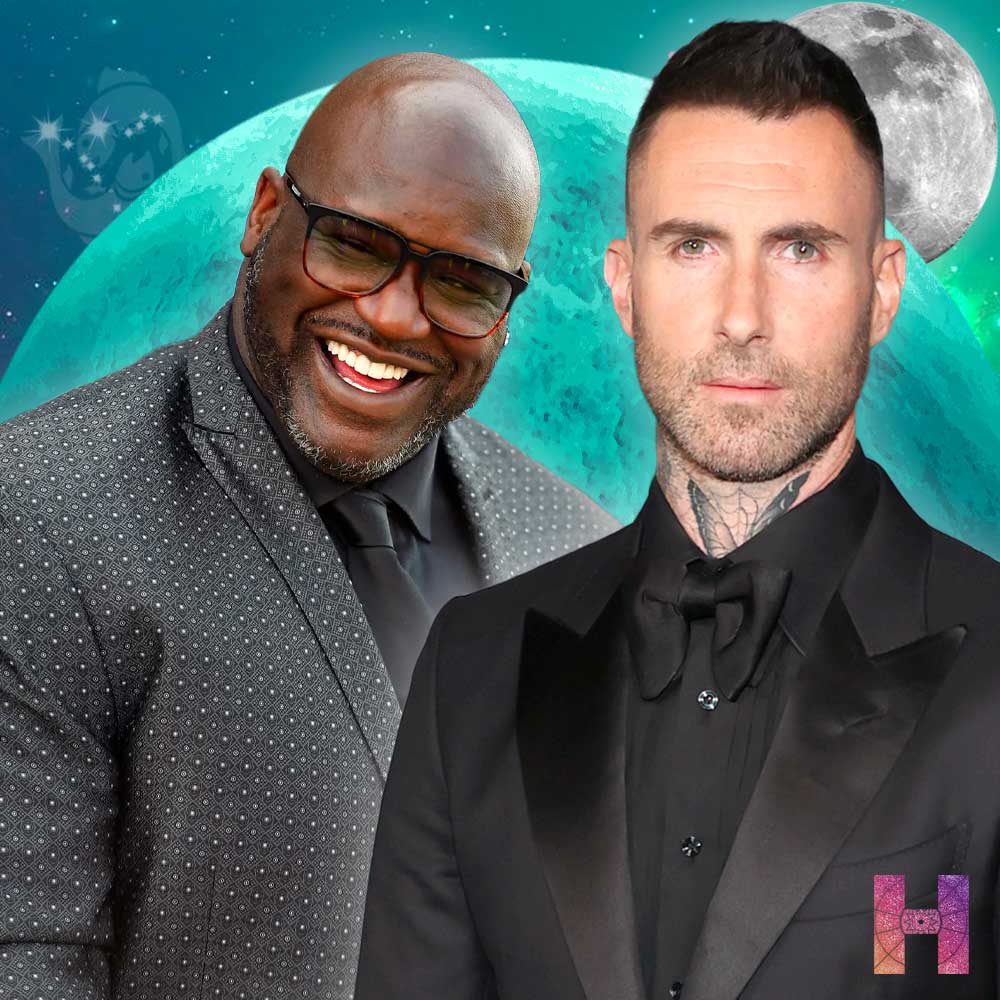 Highly sensitive, the typical Pisces man is a good listener that loves to please people, often to an extreme.

To Pisces women, love attraction is a matter of seconds: it either happens or doesn’t, that’s it.

As such, the typical Pisces woman won’t fall in love with familiar people she has known for ages, but with new faces, she’s never been with. 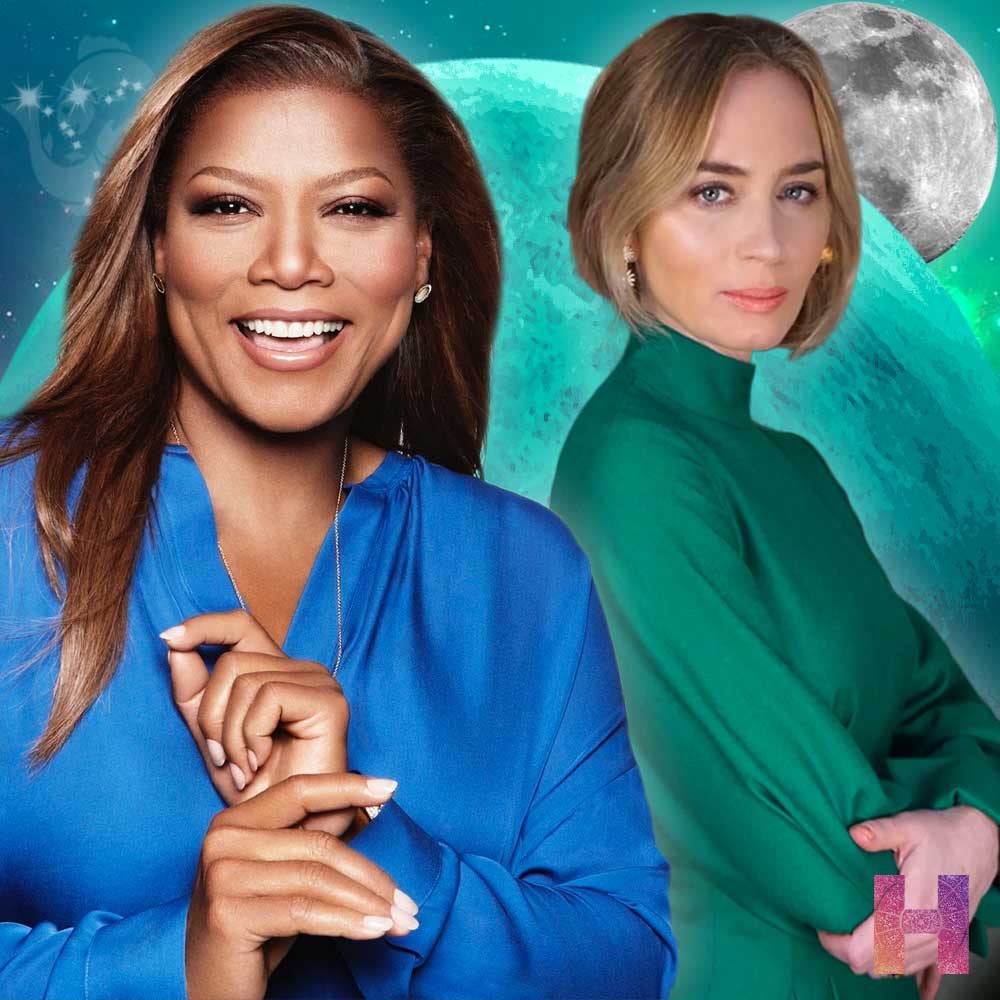 Although Pisces women seem calm, quiet, and set somewhere in the back line of defense, in bed, they’re active, innovative, and full of exploration.

Lover of spiritual discussions, the safest way to approach a Pisces woman is by finding common beliefs and shared life values.

Moreover, while the Pisces woman is naturally sensitive, she is not quick to forgive and forget.

If the Pisces woman’s heart has been wounded in the past, she will have a hard time opening it up again, even for new relationships.

Exalted by Venus, Pisces is a sign of incurable romantics, devotion, pleasure, and all that is beautiful and tender.

Pisces are not searching for just any love but a soulmate connected to them with an invisible umbilical cord.

That’s why Pisces is ready to give up on everything for the ideal life partner.

Pisces is DEDICATED in love

However, emotional storms can drive Pisces apart from loved ones, push them into complicated romance, or put them into unwilling and powerless situations.

Still, emotions can also help the astrological fish swim through the muddiest waters and find the one their heart is looking for.

Pisces is a GENTLE and GENEROUS

In a constant search for perfect love, Pisces tend to forget about moral values.

Although Pisces has a changeable nature that allows them to be carefree regarding daily flings, short-term relationships and adventures are not typical of this zodiac sign.

Once Pisces discover someone they love and trust, they become loyal, driven by the purpose of making their partners happy.

However, if romance fails, folks born under the Pisces sign tend to swim into the next river (romance) without even realizing it.

Pisces is an INTUITIVE ROMANTIC

Sensitive and kind, the Water sign of Pisces is an old-school and intuitive romantic.

Lovers of arts, the best way to impress the Pisces natives is by inviting them to a painting exhibition, theatre, or yoga session.

To connect with Pisces, you must accept their emotional struggles, take charge when needed, and also embrace a quiet, more passive flow in life.

Pisces’ Neptunian nature makes them dreamy and very romantic, a perspective that reflects how they love.

Pisces will bring body and spirituality into the bedroom – creating a surreal atmosphere of escaping reality.

That’s because Pisces often get confused, lost, change plans, and are late.

Yet, Pisces’ compassion and love for friends compensate enough to keep them close.

Pisces will always put the needs of others above their own, which does no good.

This is why Pisces folks must befriend people who understand their boundaries – however unclear they might be.

Given their intuitive nature, Pisces sense if something is wrong in the family – long before bad things happen.

At the same time, Pisces’ psychic powers and instinct can sometimes become problematic.

Overwhelmed with early signals, Pisces give up on love or leave the family, eventually triggering the result they’ve felt – like a self-fulfilling prophecy.

When building families, Pisces must remind themselves that it isn’t perfection they seek but the state of inner peace.

Intuitive and dreamy, Pisces are great in jobs that require creative skills.

Occupations that fit Pisces like a glove are doctors, veterinarians, musicians, painters, and anything that allows them to hide their true identity.

With a dreamy nature, Pisces don’t give money too much thought and will often try to make enough money to achieve their goals.

However, when the goal is powerful enough and able to give Pisces a deep sense of purpose, these folks will spends as much as needed to achieve them.

Which one of Pisces’ traits resonates with you the most?

Which characteristics of the Pisces sign do you think we’ve missed and should include in our next article update?

Here's everything you need to know about the mystical...

Here's everything you need to know about the balanced...

Here's everything you need to know about the entertaining...

Here's everything you need to know about the 'king...

Here's everything you need to know about the spiritual...